What Adam lost in fall?

What Adam lost  in his fall was exactly this gift  to administer or to rule, a gift which was priceless  and freely given. The whole earth with its animal kingdom, vegetation, oceanic kingdom, the arena of astronomy was subjected to his authority. In sin, he lost control over everything.

When Adam lost control over the Creation, the Creation also suffered without a proper  Administrator.

Creation is still longing to come under the ruling  of the one  whom God has  appointed.  Its earnest anguish is expressed in the Bible

When  the earth lost its proper administrator  it suffered another evil simultaneously. It was brought under a  wrong administrator, Satan, enemy of  God and  man.

He made the earth his own kingdom and started ruling  the earth according to his own norms. He started implementing his laws in this earthly kingdom.

His laws of administration are basically threefold.  “stealing, killing and  destroying”. (John 10:10)

In the following chapters of the Bible clearly portraits  how Adam is losing this authority  over the creation one by one. They systematically  break  away  from Adam after the fall. 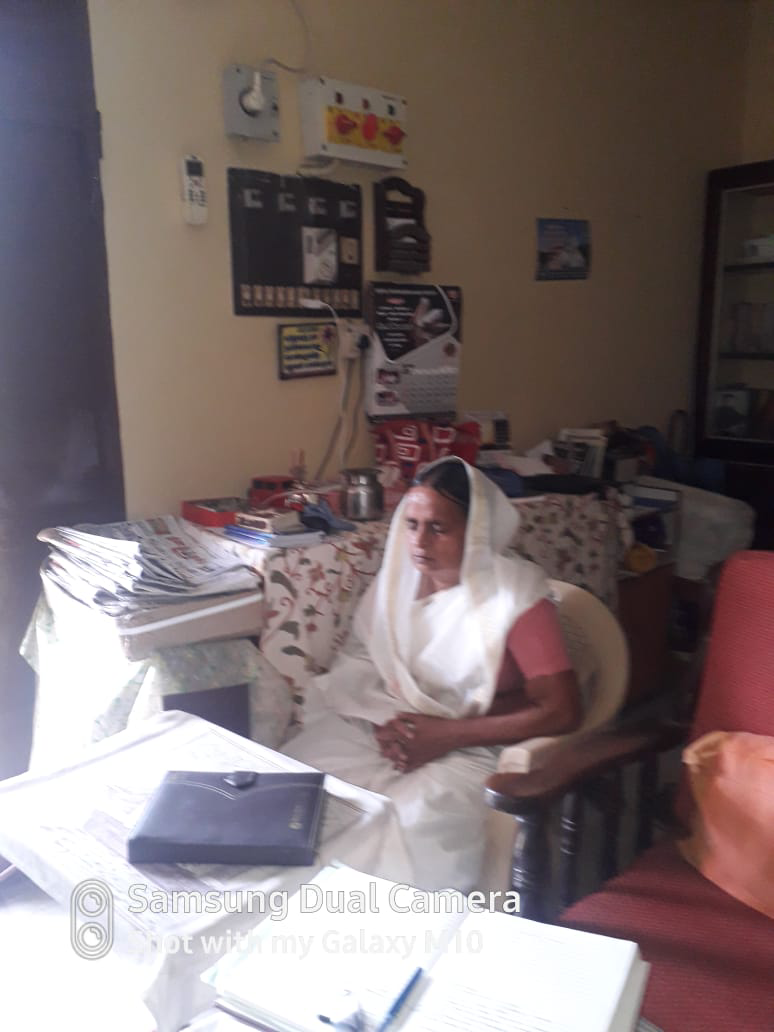 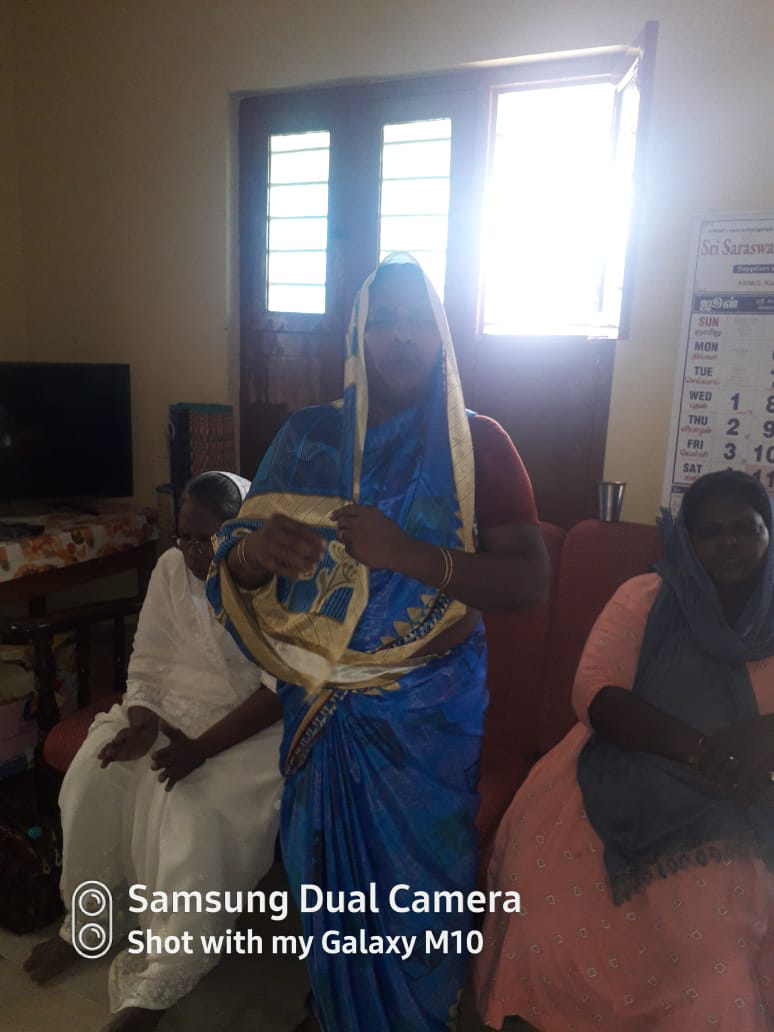 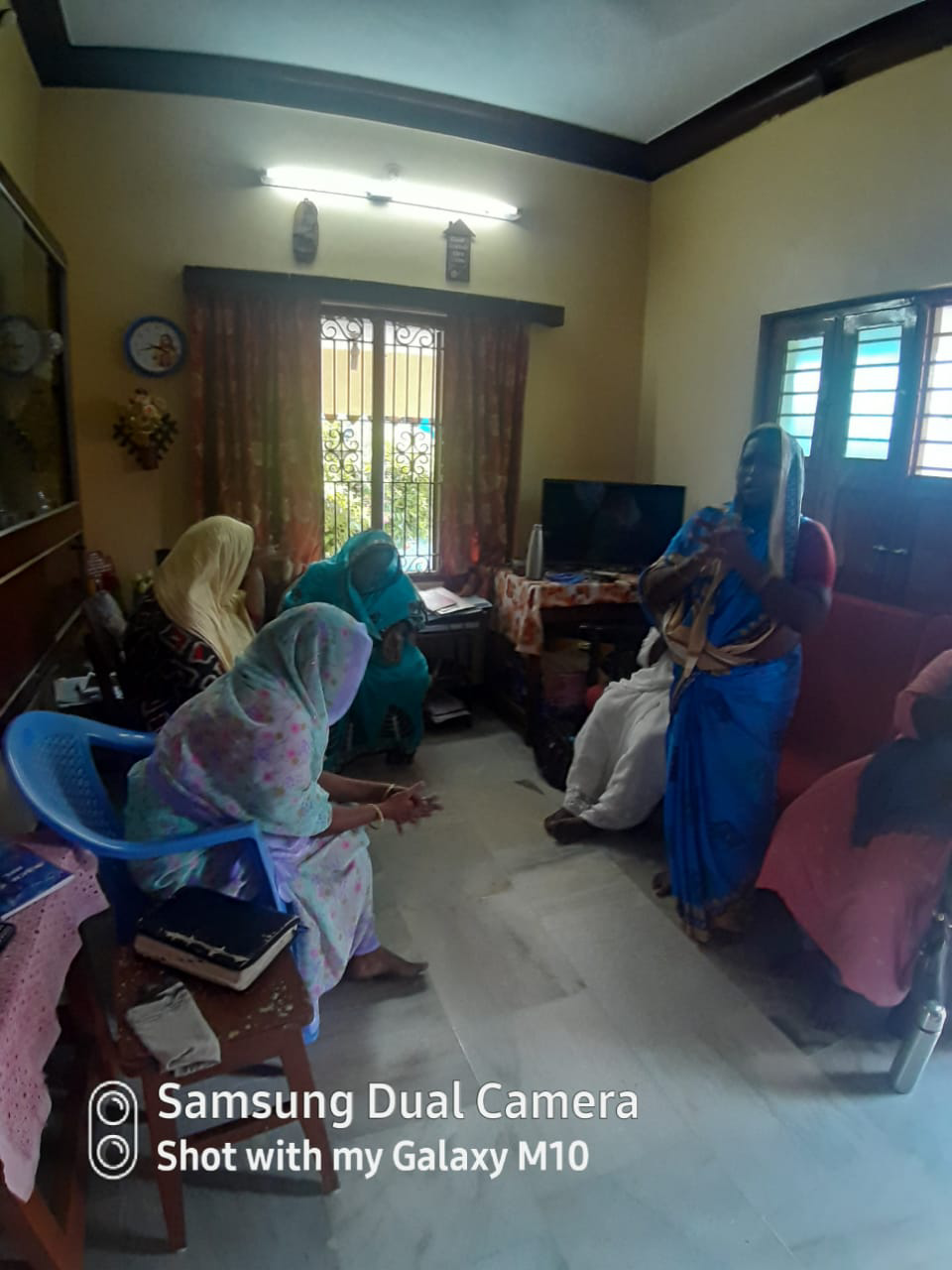 Prayer points for proper road, drainage, in the district of Karur and its surroundings was raised by the Smps and Smlas of Karur Constituency and their prayers are being answered.Glory be to Jesus Christ. 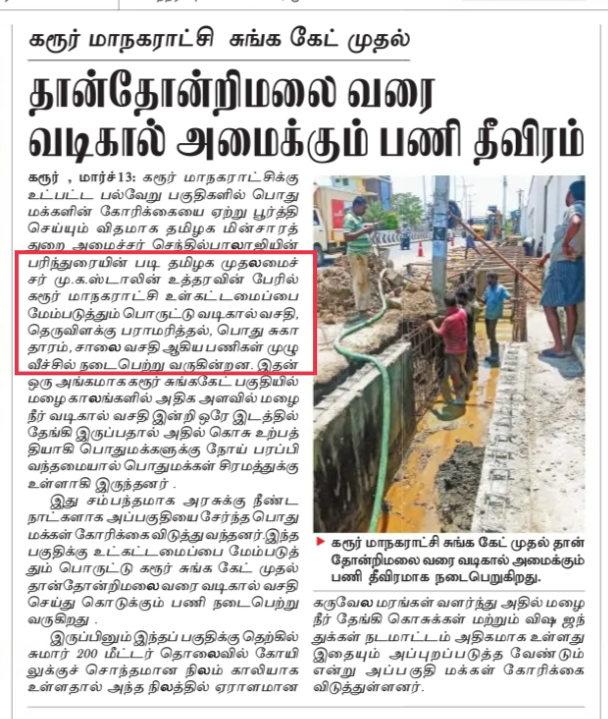 BFF (BE FORMED AND FORM)

Now a woman, having a flow of blood for twelve years, who had spent all her livelihood on physicians and could not be healed by any, came from behind and touched the border of His garment. And immediately her flow of blood stopped.

The school teaches us about

EXPANSIONS OF THE APT(Activating Prophecy Training)

APT training started spreading all over India like a wild fire. 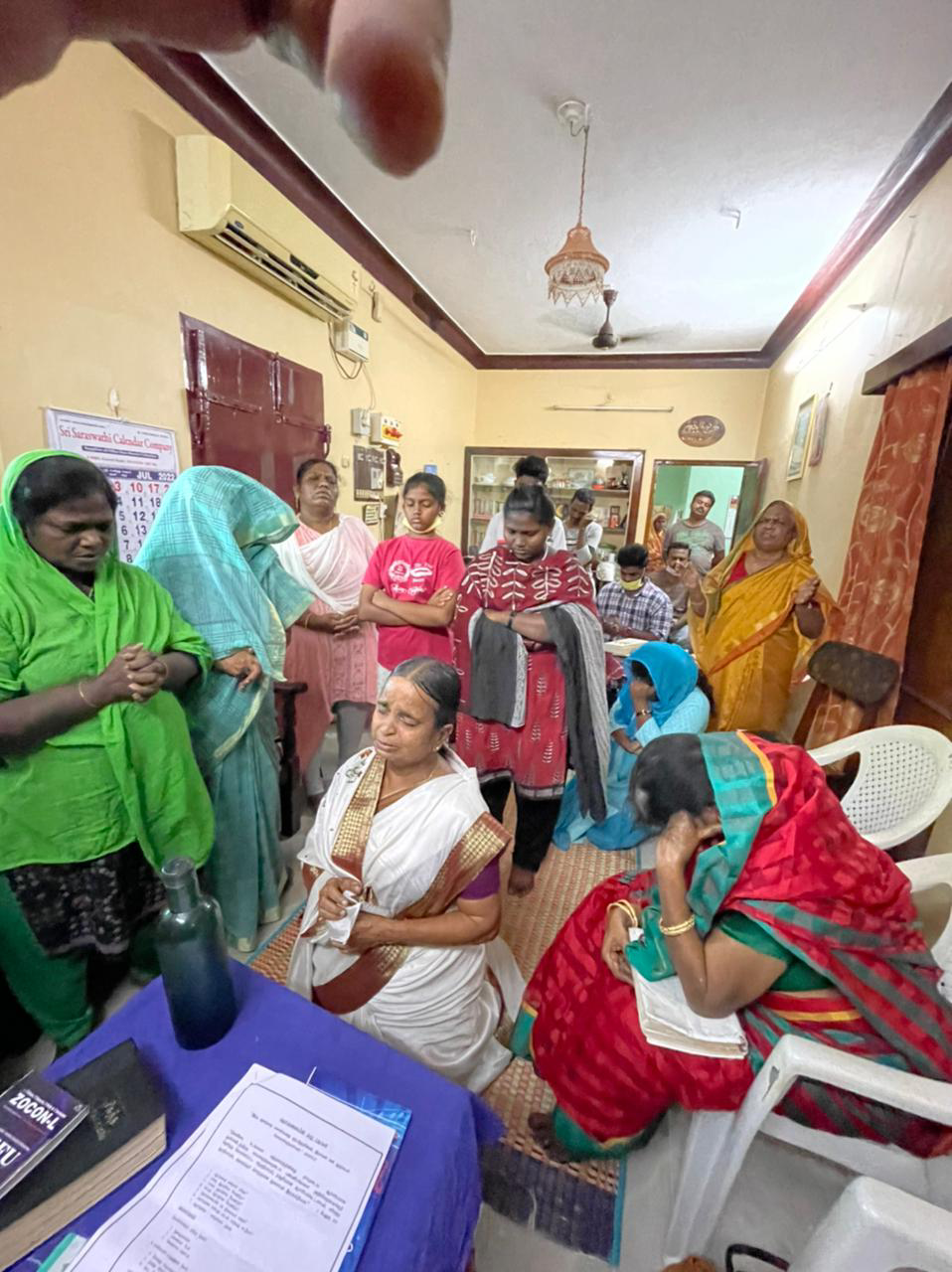 Fasting prayer conducted with all the 9 states North region together on every Friday of May from  6-7 PM.

Paul and Barnabas appointed elders for them in each church and, with prayer and fasting, committed them to the Lord, in whom they had put their trust.

Sol.Sairam: I went to collect the birth and marriage certificate and I was supposed to correct adhar card and there I met my relatives and they helped me to correct the aadhar card .The Lord made me to meet my relatives.All glory to Jesus christ.I testify that my son was not ready to go for driving school both 2wheeeler and  4 wheeler.After praying for him,my son went for driving school and got both licence from RTO.

All glory to Jesus Christ

He made him ride on the high places of the land, and he ate the produce of the field, and he suckled him with honey out of the rock, and oil out of the flinty rock.

Be Formed and Form is a 5 day short term course. As per Eph 4:11-13, it perfects the saints,  for the work of the ministry, for the edifying of the body of Christ, ………until we all come into the unity of the faith and of the knowledge of the Son of God, to a full-grown man, to the measure of the stature of the fullness of Christ; The Lord wants the Church to be transformed according to Eph 5:26, 27 to make her holy, (cleansing her by the washing with water through the word), and to present her as a radiant Church. By BFF training, the Church awakes and arises to shine in the world. So far 600 batches have been conducted across India in various languages. The students were from almost all the States of India and abroad. For Further details: Contact Sol.Jagdish Naik Ph:9930804564 Come, be blessed and bless others!

National Worship Coordinating team has been directed to collect any revelation/inspiration received during worship, (both personal/troop prayer atmosphere).We are expected to report these revelations every Sunday, scheduled meeting online.

We need to prayerfully move ahead asking the Lord for further directions to bring Divine Governance in our midst. Hence, we welcome you to participate in Kingdom building and restoration process. Kindly message the revelations with interpretations (as per the leading of Holy Spirit) on personal chat or Shield West group, by Saturday or before.

7 fold Agenda for the Global Churches/Church Leaders/Evangelists/Missionaries … (given on 27.10.2014)

To safeguard them from COVID 19 and solution for their Livelihood (Based On Early Christian Church Acts 2: 42-47)

Why the Lord has permitted COVID-19 ?

To Restore the Church of Jesus Christ Acts 2:42-47

Praise God for the successful completion of 36,079    slots  in National Worship Centre with a Non Stop Worship (24/7)

PROPHECY NEWS – Why Does The United States Just Keep Getting Hit By One Historic Nightmare After Another?

Why Does The United States Just Keep Getting Hit By One Historic Nightmare After Another?

Have you become numb to all the bad news yet?  Almost every single day, something really horrible seems to happen in the United States.  It is just one thing after another and it has been that way for months.  It is as if we are in the midst of some sort of a “perfect storm” that never seems to end.  In all my years of writing, I have never seen anything like this.  There is so much bad news happening right now that it is literally impossible to keep up with it all.  Events are starting to accelerate at a pace that is absolutely breathtaking, and I am extremely concerned about what the remainder of 2022 will look like.

For months, I have been writing extensively about the endless drought in the western half of the nation.  We are being told that it is the worst multi-year megadrought that the region has experienced in 1,200 years, and it just keeps getting worse and worse.

Meanwhile, we are witnessing absolutely unprecedented flooding in the eastern half of the United States.  For example, some parts of Kentucky were just pummeled by more than 10 inches of rain in a 24 hour period…

In some areas, it literally looks like a tsunami has just come through.  One local meteorologist admitted that he does not “have the words” to describe the incredible devastation that has taken place…

‘This is likely to go down as one of the worst flash flood events to ever hit the state.’

Governor Andy Beshear is telling us that this was “one of the worst and most devastating events in Kentucky’s history”, and he isn’t sure why such bad things keep happening to his state…

Of course this disaster in Kentucky came just one day after one of the worst flooding events in the history of the state of Missouri.

We are being told that we just witnessed “the wettest day ever for St. Louis”, and in some areas of the city the water actually got more than 8 feet deep…

Damage across the region was widespread after a massive downpour dropped more than 12 inches (30 centimeters) of rain in parts of St. Charles County and up to 10 inches (25 centimeters) elsewhere in the St. Louis metropolitan area. Most of the rain fell in a few hours shortly after midnight.

I really wish that we could take all of that water and give it to ranchers and farmers in the western half of the country, because the endless drought is absolutely crushing them.

Meanwhile, the U.S. is now dealing with two major simultaneous pandemics for the first time in my entire life.

Despite everything that health officials have tried, the first pandemic is still raging, and now another frightening disease is spreading like wildfire.

This current monkeypox outbreak began in Europe, but this week the U.S. officially became the world leader in confirmed cases…

The number of confirmed cases continues to rise at an exponential rate, and this is one disease that you definitely do not want to get.

Many victims have described experiencing absolutely excruciating pain once skin sores start developing, and one man that has had both COVID and monkeypox is telling us that monkeypox is “100 times worse”.

On top of everything that I have already discussed, we just got confirmation that the U.S. economy has plunged into a recession…

Of course Joe Biden will never admit that a recession has now started.

Biden noted that ‘both Chairman Powell and many of the significant banking personnel and economists say we’re not in a recession.’

‘Businesses are investing in American in record rates,’ Biden boasted.

But everyone can see what is happening to the economy, and we are being warned that we must endure some “short-term pain” in order to get inflation under control…

Without a doubt, we desperately need to do something about inflation because it is absolutely eviscerating those at the bottom of the economic food chain.

For example, just consider the plight of one woman that was recently interviewed by CNN…

Duran has been receiving unemployment benefits and working part-time as a caregiver for a resident at a senior center. To make ends meet, she’s also been selling her own gold jewelry and crushing aluminum cans to recycle for extra cash.

FYI: Information's to be forwarded to the State Secretaries: Please work with your core team and get this information for publishing in Archive portal.

We require Testimonies from Gift School/Troop Churches, Report works for Documentation, Plans for the month for your State-20 Point Program Execution (word document), Praise Reports for Regional Meetings, Shadow Parliament Reports, any others...

Data should be sent forth to this email address - weekly - Regional allocation Email so it can be uploaded to server. Otherwise it can be sent to me personally in WhatsApp, will forward to IT wing.

Any difficulties in Documentary creation also please feel free to reach out, we will try to work it.

We will try to make all things documented for the month of July, August, and September.

Feel free to clear your doubts and enquiries through phone or WhatsApp message or email.