Skip to content
You are here: Home » Beryl Wing 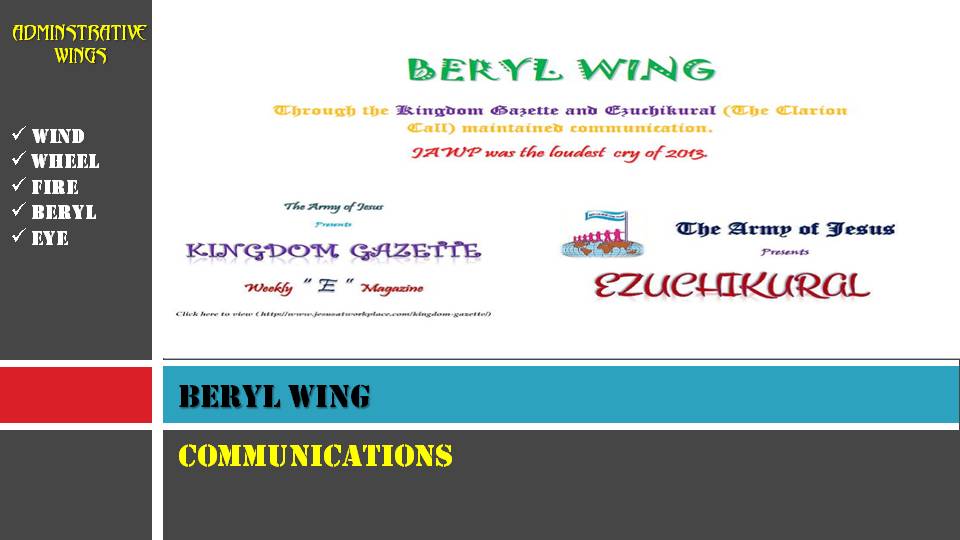 Now the Lord says, a Communication wing also should be set up.  Its name Beryl Wing.

There will be a Captain for this Wing. The prayer petitions, and all the matters should be communicated to the concerned persons swiftly. Prudence and  Wisdom should be maximum exhibited in communication.  Each word is important.  All matter should not be known to all. The members of each Wing need to know the matters pertaining to that particular wing.  All loose talks, gossiping have to be strictly avoided. Satan will try to spread  false, discouraging, news to induce unnecessary  fears and anxieties. The Beryl Wing Captain should act with prudence. He should  set up an office, instruments with                       personnel to operate, exclusively for the ENHF work. All written and Printed matters, after writing, should be brought before the Lord before sending, for corrections, if any.

The Beryl Wing captain will keep a detailed record of all the incidents, the Lord says, for, even though the ENHF has a very small beginning, seeing its end, many nations, even western countries, will approach you, asking for the “modus operandi” (mode of operation)of the NEHF  for evangelizing their country. All the  meeting reports, even those matters which seems negligible and insignificant should be noted down in future.  For many, will make a study of  this.  They will look for more and more minute details. NEHF will become the thesis subject for many Research scholars for getting P.hD. They will teach others.