Skip to content
You are here: Home » Ophir Wing 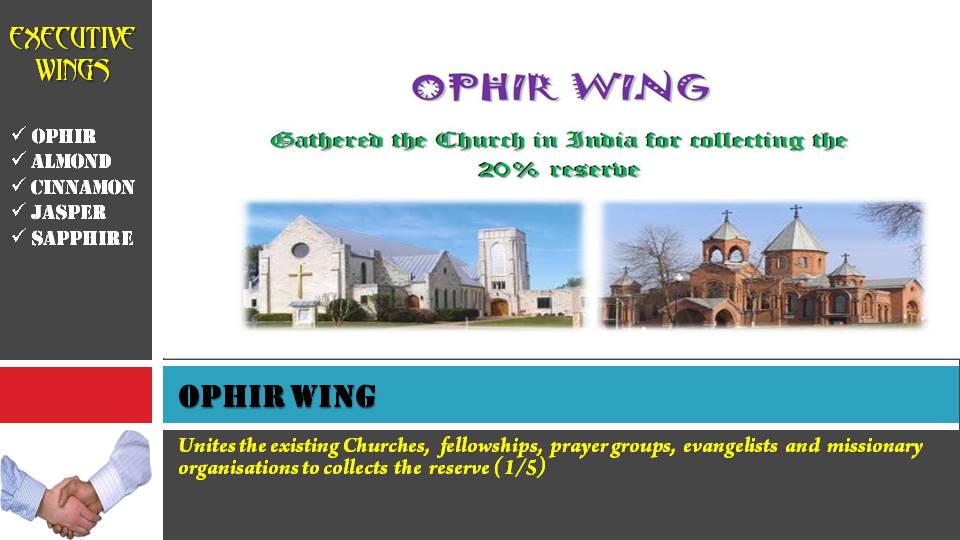 (According to the Revelation the Lord gave, in India, especially in the Churches in India great changes will take place. Hence, the Holy Spirit counseled me to make a comparative study  of what we have to do in comparison with what Joseph did in Egypt). (Gen. 41-48) As Joseph went, surveyed the land and appointed supervisors to collect the 1/5th of yield, the Ophir Wing should go out, survey the Church in India and collect the 20% believers as Hill Horses.

“ Joseph went out from the presence of Pharaoh and went about his duties through all the land of Egypt.” Gen, 41:46

Joseph was brought out hastily from the prison only that morning. Just in one day his imprisonment, sentence, everything got reversed. He was dragged out from the dungeon where he was chained and kept, now adorned with a gold chain about his neck. A person who did not posses a citizenship of Egypt, nationality, address and identity  is made 2nd in command of the nation.

foot  in all the land of Egypt

Joseph received all these just in a day.

Joseph, who lived for 13 years in Egypt as a prisoner and slave.  He got the Egyptian citizenship and became the first citizen in the country. Joseph transformed his thinking and outlook so that his mind set up is changed from that of a slave to one royal inheritance. He now views everything from a different angle. He is  given  responsibilities of many portfolios. They consist of the department of agriculture, civil supplies,  transport and soil conservation. Hence he goes  for an inspection of all the areas.

He should plunge into action now.  No time to waste.

Even now we must see India in faith as a Christian country.  There should be a change in overall attitude and outlook. The Holy Spirit insists on this again and again.  The Lord shows me the incident of a slave being brought to the palace, having even adopted into a royal family. It will take some time for the child to get accustomed to the royal surroundings and to be convinced of his rights and privileges.  It will take even more time to take up the authority in his hand.  But the transformation took place in Joseph within a day. It should take place in the children of God in India very soon. The Lord inspires that we should intercede and specially pray for this.  Let mothers feed the children’s mind with the fact that we are born to rule.

Things we have to note carefully here:

The Indian Christian Church was under slavery in India for the past 2006 years. It is going to get freedom and take up ruling authority in hands.  It was considered as ‘foreign’ as Joseph. (He was not a citizen of Egypt) India is going to be declared a Christian country. Everything, the Indian Constitution, people’s inhabitation areas, religious laws, social customs, schools, Colleges, syllabus, Education system laws, all are going to undergo a thorough change. Having this in mind we have to prepare India even from now for the coming events after 14 years with foresight and vision of the Holy Spirit with faith.  He is extending a call to all the Churches to  survey the land and gather statistical data. This task should be entrusted only with those who would accomplish it  by absorbing this vision  with an attitude of faith .

Making a survey of the present India

In order to increase the yield in the seven abundant years in the country, ENHF has to take up two tasks.

The Captains of Almond Wing, Cinnamon Wing, Jasper Wing and Sapphire Wings undertake and execute the action plans for this. We are going to learn about them.

Ophir wing is meant for that. A captain should be appointed for this.

The duties of the Ophir  Wing Captain in the present churches: