Skip to content
You are here: Home » Volume 9 Issue 52

Restore all that was hers (Continuation)

The Lord was preparing the King to meet this widow so that his heart will be inclined towards her request.

2Ki 8:5b And Gehazi said, My lord, O, king, this is the woman, and this is her son, whom Elisha restored to life.

The Lord had  decided to do a favour to her through the King, so that her house and land will be restored to the widow. God  directs people and situations in such a way that the people in His plan  get  linked with  each other.

In Bible we read another such incident of divine coincidence  in the book of Esther,

Est 6:1-4  On that night the king could not sleep, and he commanded to bring the Book of the Records of the Matter of the Days. And they were read before the king.

Since the Lord had kept the King’s heart  prepared to show favour to her, even before she makes an appeal, the king asked her. She replies and this serves as a verification for the king.

2Ki 8:6b   So the king appointed to her a certain eunuch saying,

Immediately the king appoints a eunuch for restoring her house and property. It was not only giving a command  but appointing someone to execute it too.

God is restoring the fortunes of India.

Even the Christians of India.

Dates are given. When restoration comes, the date also is mentioned.

The day the Church went into famine period. January 1, 2014- upto this day, everything should be restored.

What all have you lost? Money, house, yield of the land, name, reputation, social status, children’s future, etc.etc.

A full restoration is ordered.

You need not go and argue with the trespasser or encroacher. The King himself will appoint people. For you . The  Orders from the heavenly court will come so that you will be spared of all

India you are blessed!  Rise up! Shake off all your dust!

The days of sojourning in the land  is over! The days of slavery and suppression is over. The Lord’s  glory is shining upon you. (Completed) 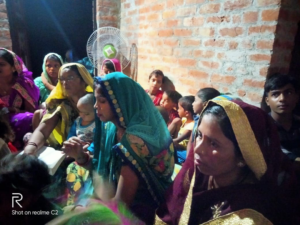 Testimonies: Sol.Seema from Khushi nagar: I was delivered from 8 evil spirits when the team prayed with me on a conference call.

Praise God for the successful completion of 33,394 slots in National Worship Centre with a Non Stop Worship (24/7)

END OF THE WORLD:'IT's GONNA GET VERY INTENSE' PREACHER WARNS OF BRIMSTONE AND FIRE

END OF THE WORLD fears are on the rise as Christian evangelists and doomsday preachers predict brimstone and fire will signal the imminent return of Jesus Christ.Doomsday prophets who await the Second Coming of Christ, have bizarrely claimed biblical signs of prophecy are unfolding. Paul Begley, a preacher and online personality from West Lafayette in Indiana, US, is a chief purveyor of claims the end of the world is approaching. Pastor Begley, who hosts The Coming Apocalypse series on US TV, frequently links modern-day events to biblical prophecies.

He has now claimed a green fireball over Australia is yet another sign of the coming end times.

Pastor Begley said: "The meteorites are flying over our heads everywhere now.

"It's starting to happen guys. Mike from the Around the World said it would.

"But here's the deal, a mysterious green fireball racing over the sky in Australia, in the outback, shocking some people about one o'clock in the morning, this morning, in Australia.

"It was incredible and it was very neon green, but it's exactly what Mike from Around the World said was going to happen."

Mike from Around the World is another conspiracy theorist who often features in pastor Begley's broadcasts and who believes natural cosmic phenomena are signs of the end times.

Together with pastor Begley, the duo interprets eclipses, asteroid flybys, meteor showers and earthquakes among others, as signs of the end days.

Pastor Begley said: "It is going to get very intense guys, we are going to see all kinds of different things happening.

"So it's very important that people realise in the last days the Bible talks about brimstone and fire falling from the heavens, and the Earth is going to be going through a lot.

"The heavens are shaking and quaking, the Earth is going to be shaking.

"Volcanic eruptions, earthquakes, megaquakes, tsunamis, cyclones, typhoons, strong monsoons, Blood Moons, pontoons - all of it's going to be happening in these end times and I don't think people are ready.

"I know they're not ready for the signs in the heavens."

However, despite the firebrand preacher's doomsday claims, there is no reason to believe Earth is experiencing any unusual increase in cosmic activity.

According to the US space agency NASA, the fireballs like the one seen over Australia are very frequent.

Between 1994 and 2014 alone, NASA has recorded more than 550 small asteroids streaking across our skies.

There is also no indication an asteroid is going to hit our planet within the next few hundred years.

The US space agency said: "NASA knows of no asteroid or comet currently on a collision course with Earth, so the probability of a major collision is quite small.

"In fact, as best as we can tell, no large object is likely to strike the Earth any time in the next several hundred years."

There is also no indication biblical prophecy is unfolding.

According to the Bible, no one knows the hour nor the time when the final hour will strike.

Jesus Christ said in Matthew 24:36: "But concerning that day and hour no one knows, not even the angels of heaven, nor the Son, but the Father only."